Back with Volley & Bayonet Road to Glory American Civil War

Mark and I have gotten back together after a long hiatus due to COVID-19. We got one game in during a COVID-19 lull, but we have finally been able to get back to gaming on a regular basis. This game was in July 2022. We tried the Road to Glory set up system from the Road to Glory edition of Volley & Bayonet. The orders of battle were generic ones based loosely on the Antietam organizations with a battlefield based on the Brandy Station battlefield. The goal was to try out the Road to Glory deployment card set up system. It worked very well and produced a unique battle that was not the usual line up and attack form found in most wargames. I can’t remember the outcome of the battle, but it worked very well. I tried the Road to Glory deployment card system again in a solo game a few weeks ago, and it worked very well a second time. So I can highly recommend the Road to Glory deployment card system for all regiment scale Volley & Battle games. Here are a few pictures of that game. I use 2/3rds size stands (2″ x 2″ for massed infantry and massed cavalry). The 2/3rds size stands allows most battles to be played on a 6′ x 4′ table, which is very manageable for 2 players or even a solo game. The figures are 15mm and from a variety of manufacturers.

Volley & Bayonet for the American Revolution

Steve asked about a non .pdf file version of my orders of battle for the Command Decision Stolberg Campaign. Here they are:

The above map has an added section of dragon teeth at the north end, which was present historically, but not included in the original map.

Veterans’ Day Game (Its Been Awhile)

Yes, it is has been awhile since I posted. I think life just got in the way. I have been playing some solo games, mostly American Revolution and American Civil War with both Piquet (the classic kind) and Johnny Reb 3. I did have the chance to play a Veterans’ Day game at Mr. Warflag’s house. He told me that he has run a Veterans’ Day game for the last 20 years. This time it was a fictional War of Spanish Succession game using Piquet: Field of Battle (2nd edition). We probably had too many units even with 10 players, but it was more of a social game and a good deal of fun. I don’t have the scenario notes, but here are some pictures taken by Ian (Mr. Warflag).

The Game in Action: 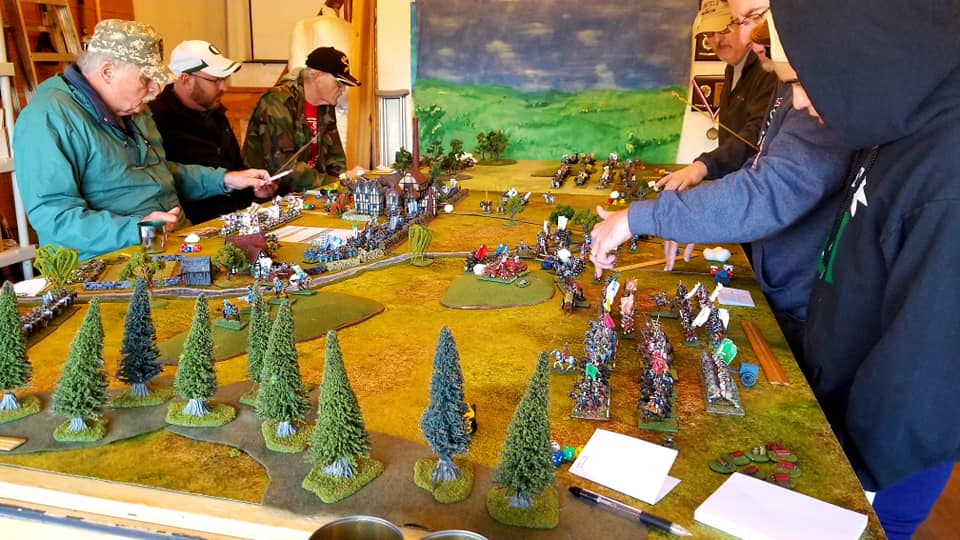 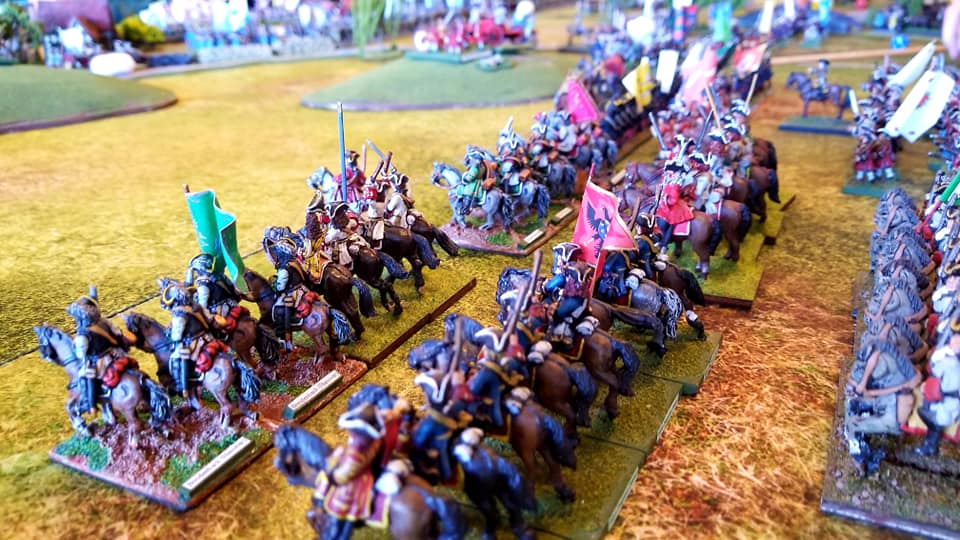 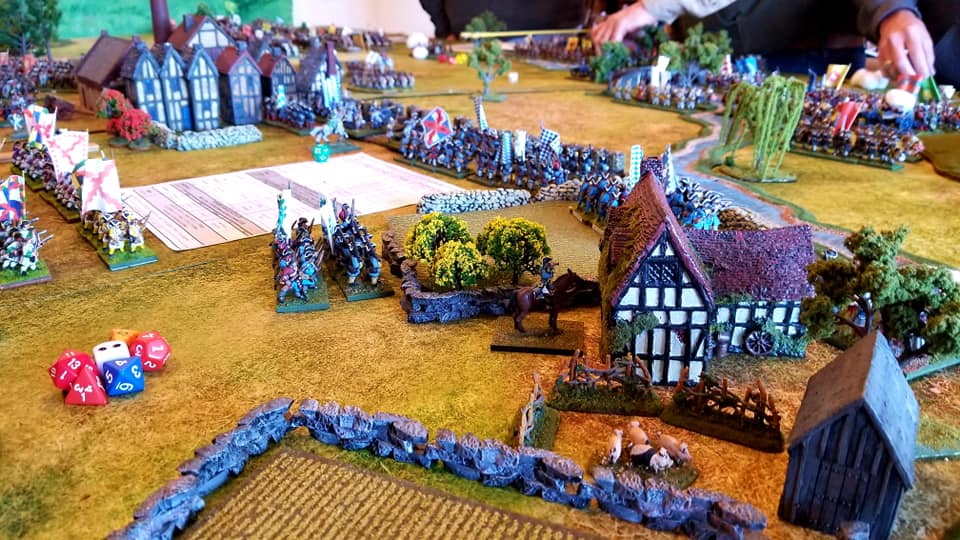 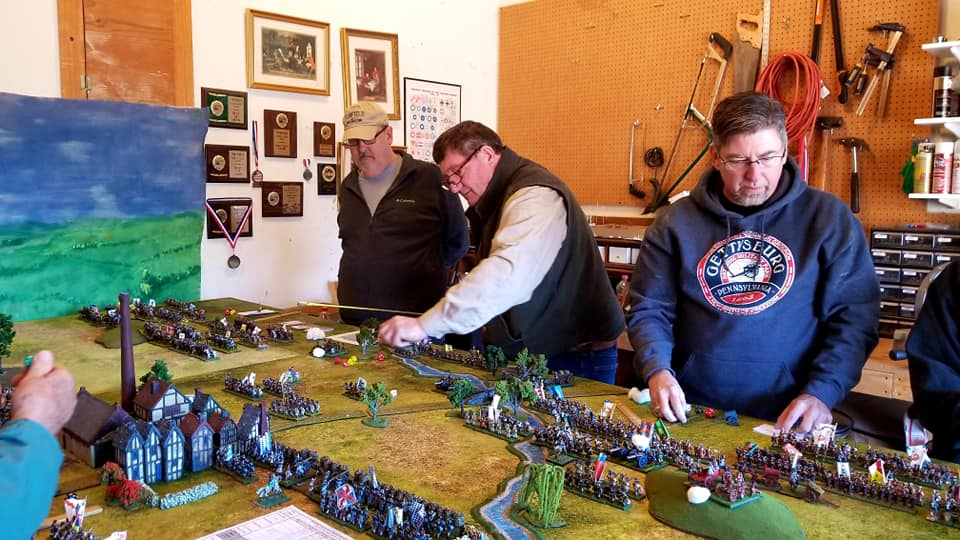 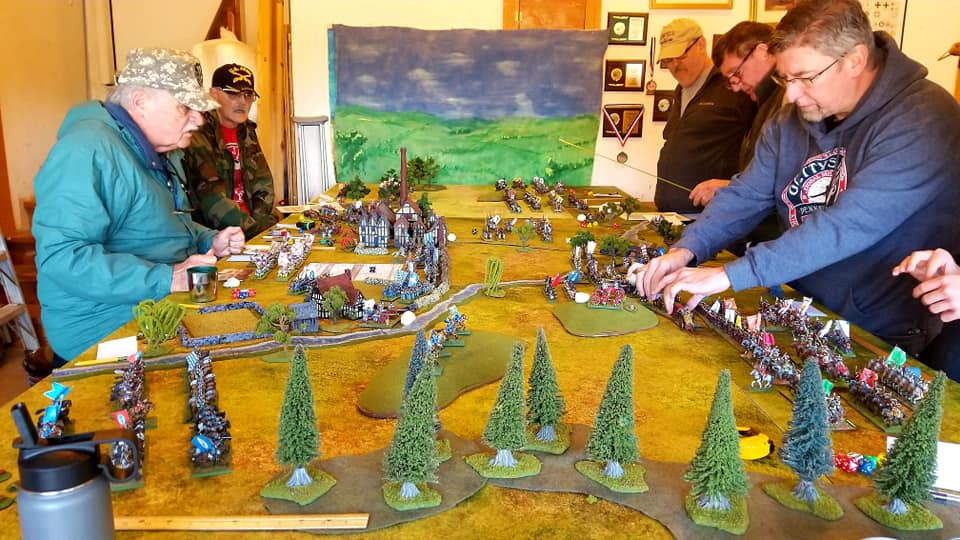 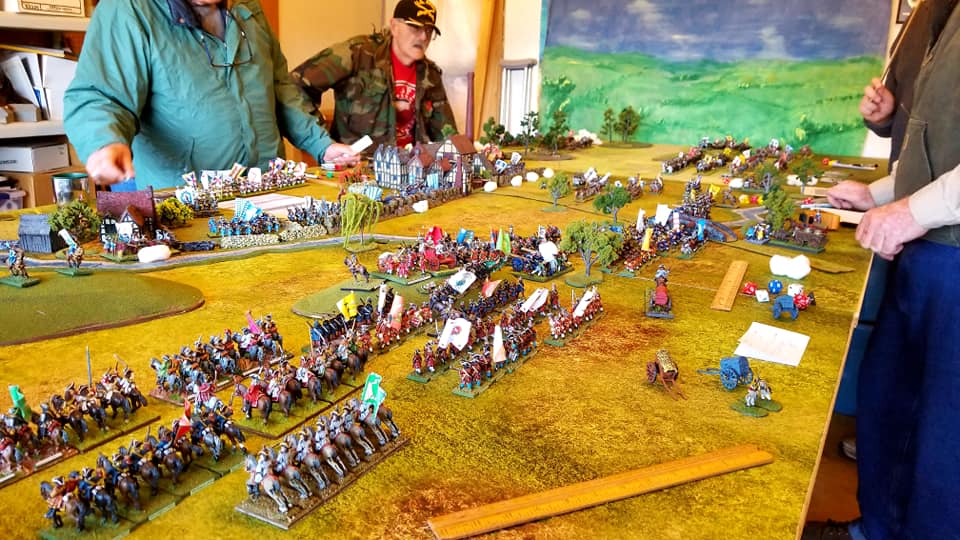 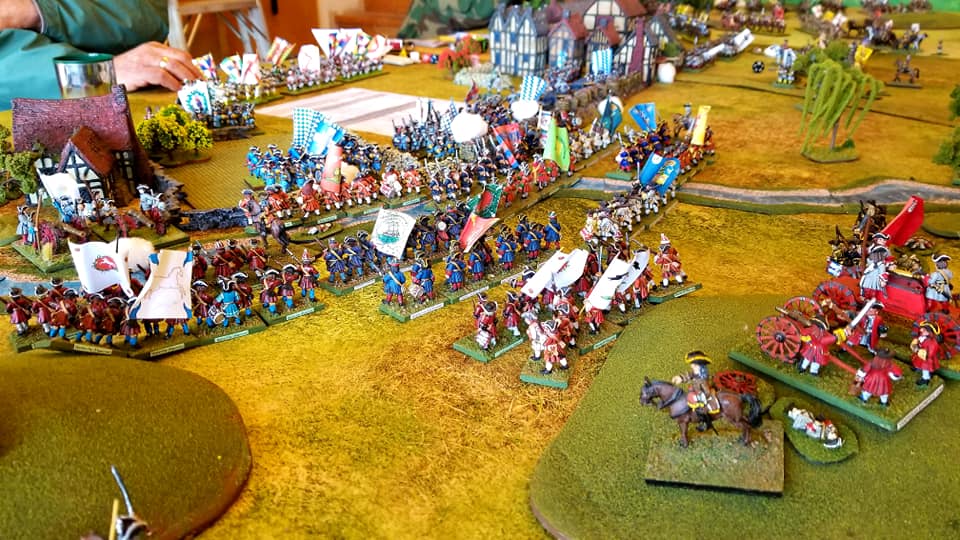 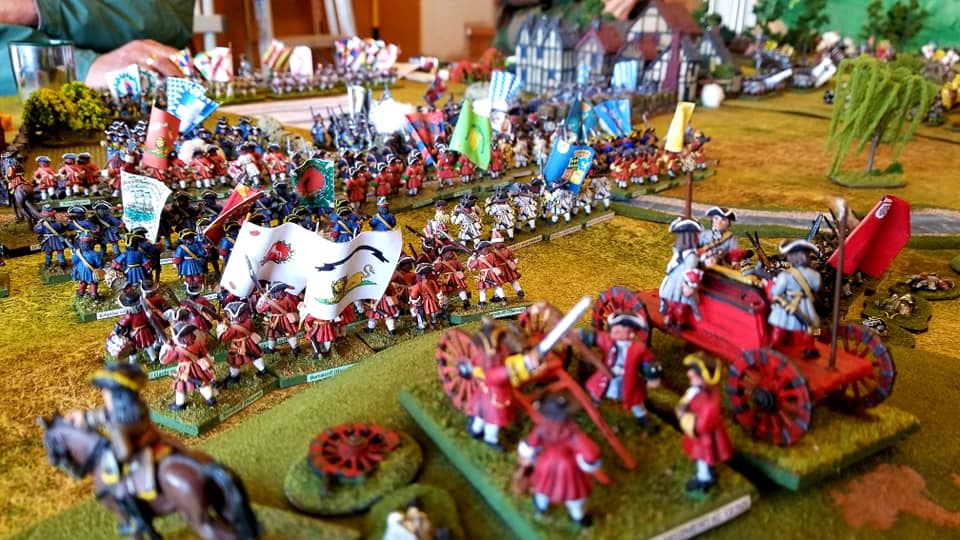 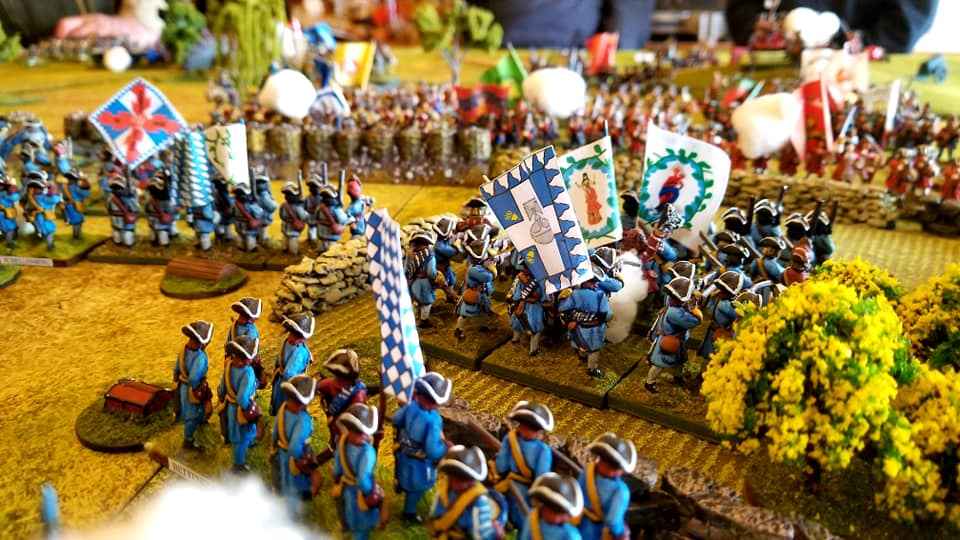 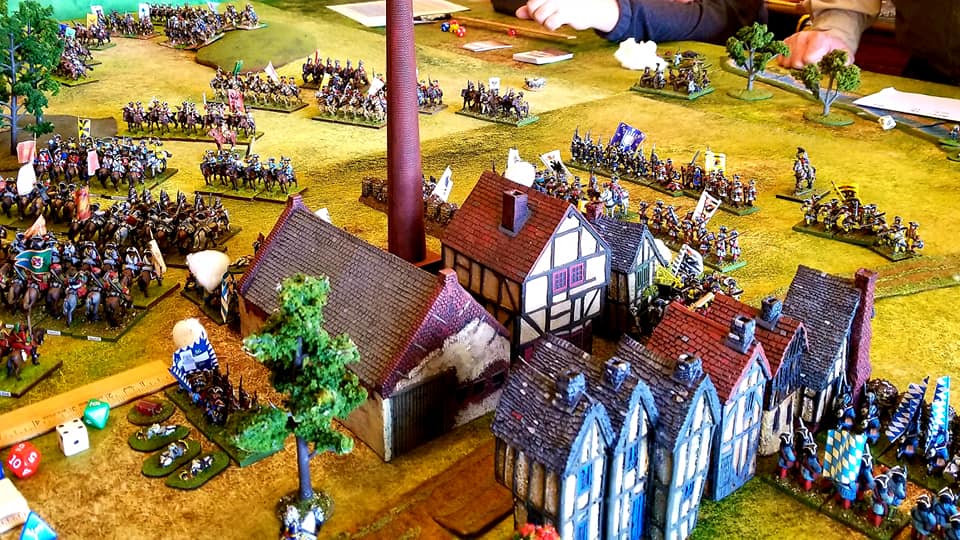 All figures provided by Ian (Mr. Warflag). He also provided the place to play, the table, the terrain, and some of his beer from his micro-brewery.

About a month ago I tried a couple of Piquet American Revolution games solo to see how the rules would work with a small number of units, and to retry the Alternative Sequence Deck Method (see page 68 of the Piquet Master rules). The goal was to see if Piquet would work with a small number of units. It had in the past with Cowpens, but I think I was OCD and wanted to be sure. I used the Cowpens order of battle for both sides and a much larger and a bit more open battlefield. Both games worked well and made me reconsider Piquet for my American Revolution campaign – the Cornwallis/Greene Southern Campaign of 1781. I also used the optional system for having a hand of cards rather than going through them one at a time.

I honestly don’t remember much about the first game other than it worked well enough for me to immediately want to try another game. In the second game, both sides pushed their cavalry forward, which resulted in some pretty decisive cavalry melees in which both sides lost units but the Americans ended up with the surviving cavalry unit. This tended to use up a lot of the British Army Morale Chips as losing a stand, losing a melee, and routing each cost an Army Morale Chip. The lesson is to be careful and avoid losing a lot of Army Morale Chips before you main body gets into action.

The Alternative Sequence Deck Method worked very well. It helped break the “waiting for the right card” syndrome that seemed to be present in all of the Piquet Field of Battle games I had played with the local gamers over the last year. The only change I did was to make it cost 1 impetus point to draw a card and put it in your hand. I played that there was no impetus cost to discard a card or to play a card other than actions done on that card. For example, I have a Move Card in my hand, I can play the card for 0 impetus, but each command or independent unit that moves on the card still costs 1 impetus point. That worked much better than paying 1 impetus point to put the card in the hand and then another impetus point to play the card as that system burned up impetus points too quickly.

The game went so well I decided to pull out my Piquet Theatre of War campaign rules and reread them. I found that there was a very interesting campaign system in Theatre of War. I have revised it to have a roster game (that is an actual representation of units). I think I have done everything I need to play the Cornwallis/Greene Southern Campaign of 1781, but more on that in another post.

Here are some pictures of the games:

My battered copy of the Piquet Master rules: 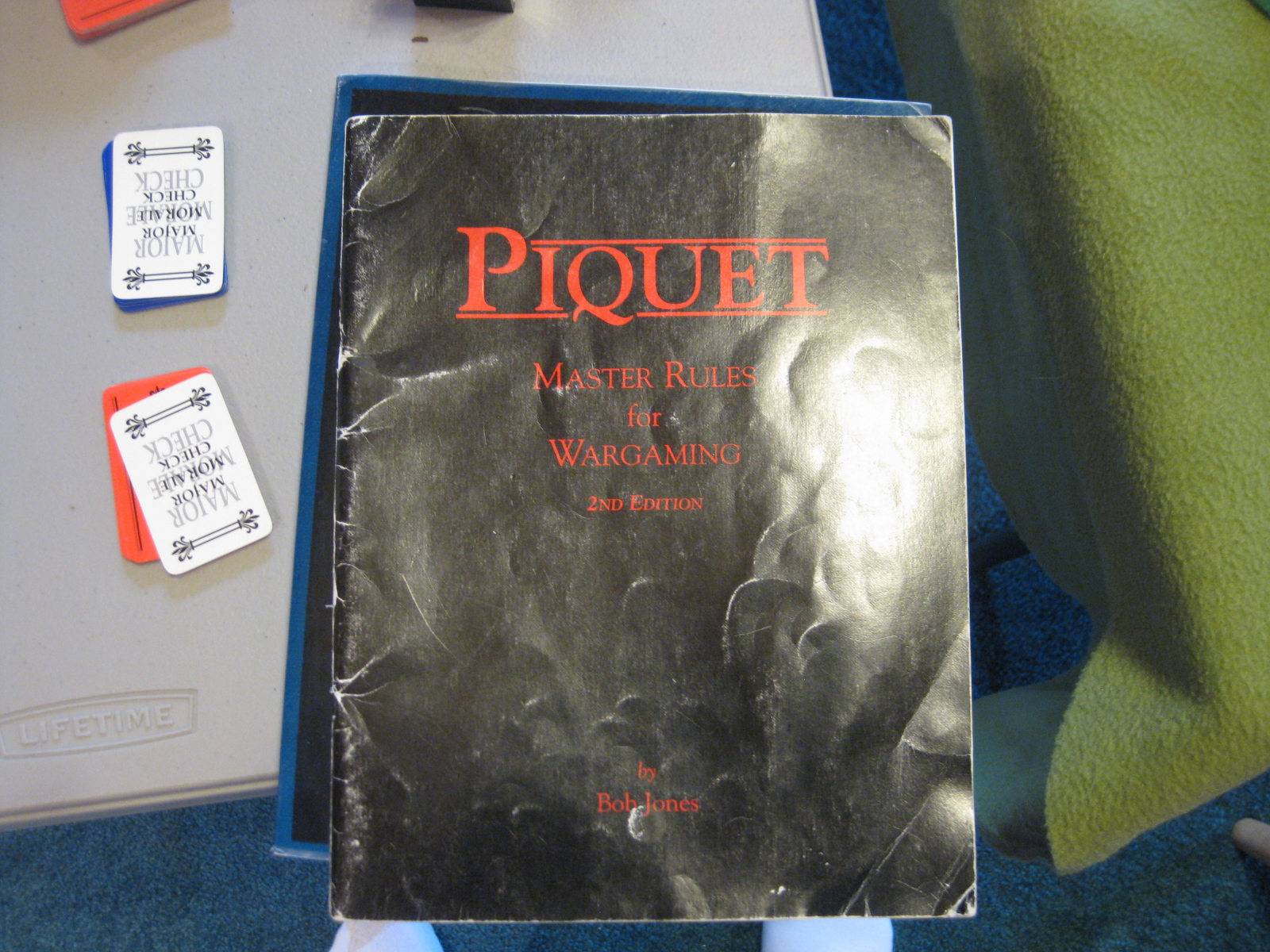 The table used for both games: 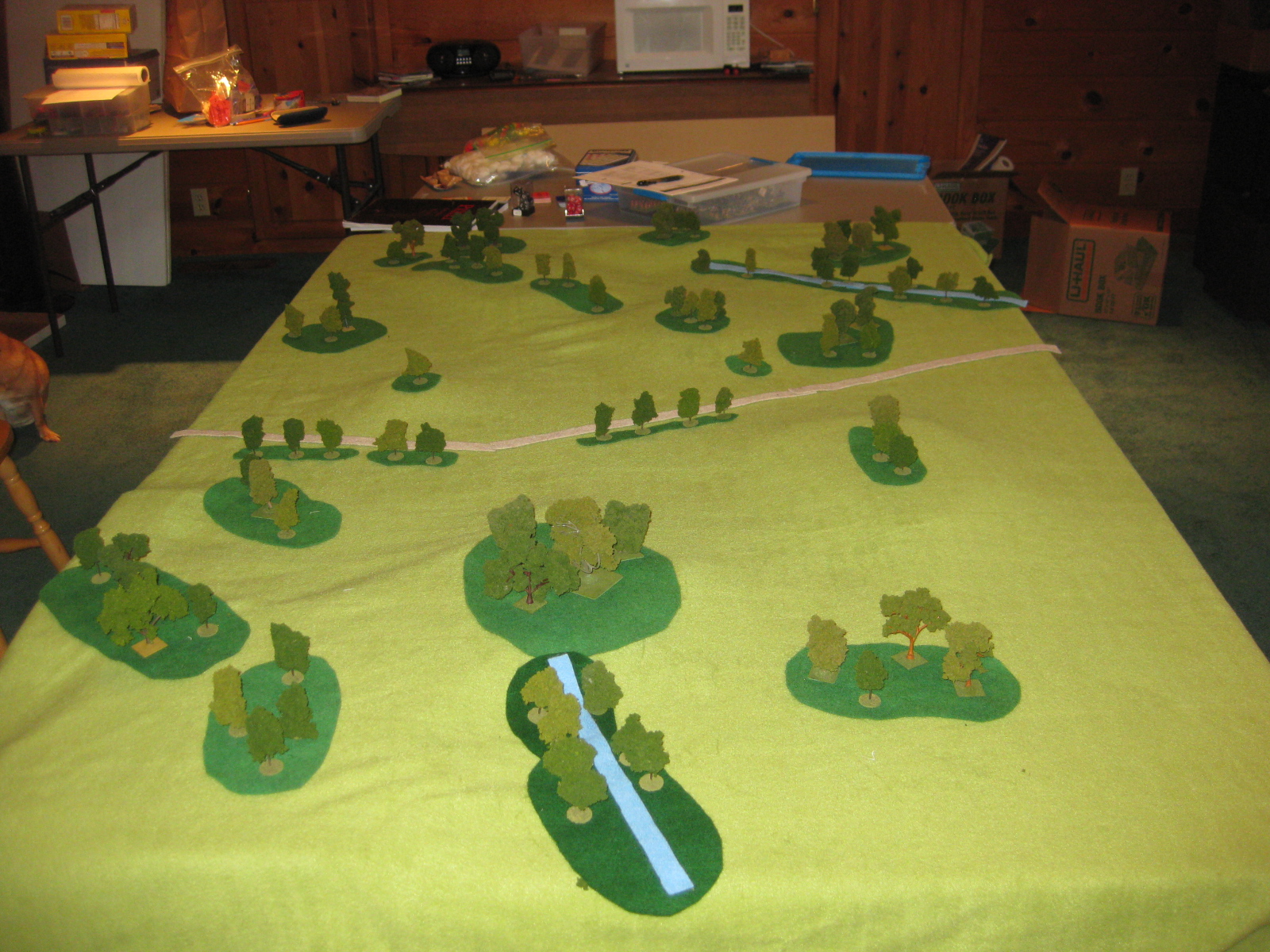 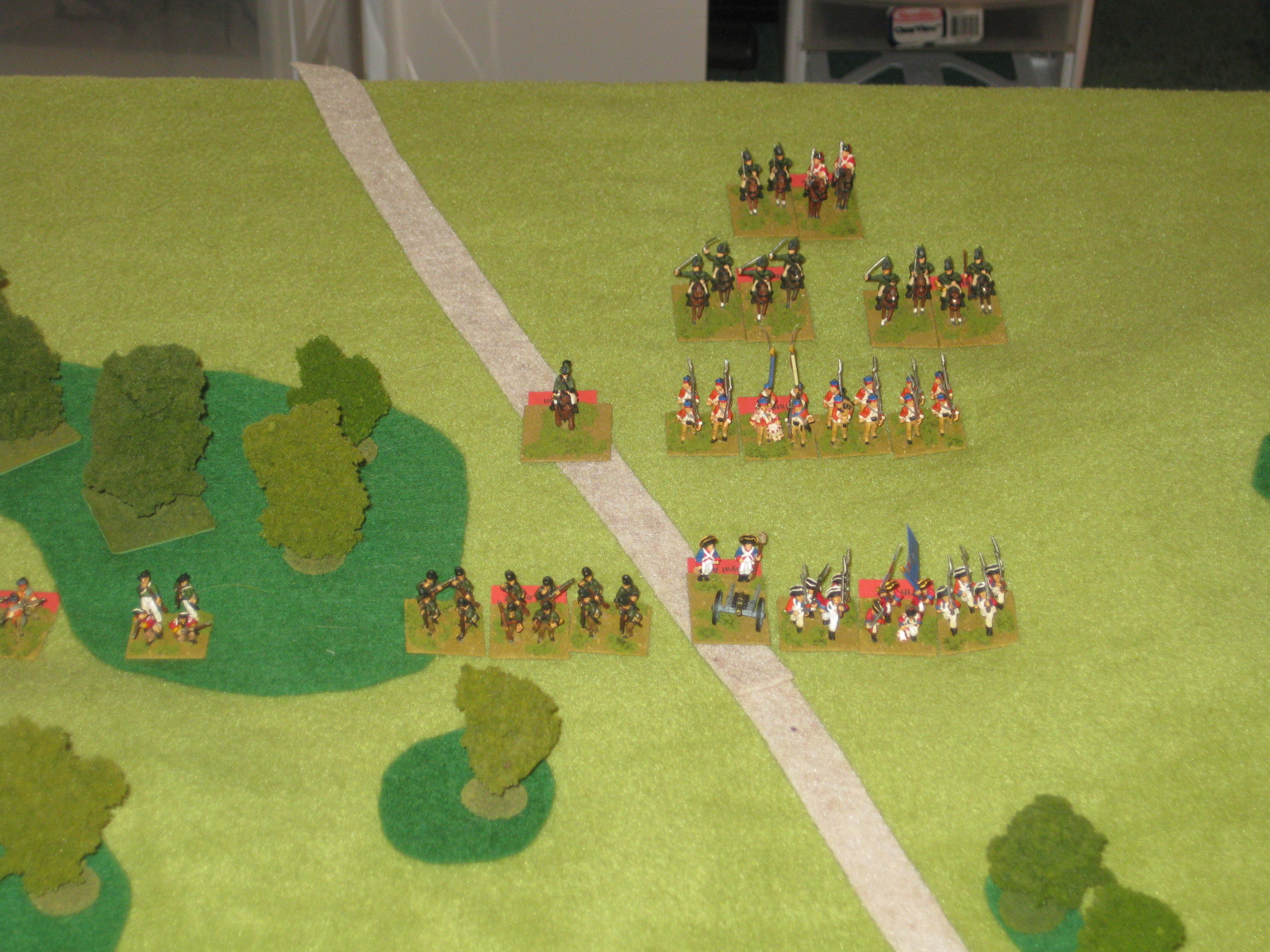 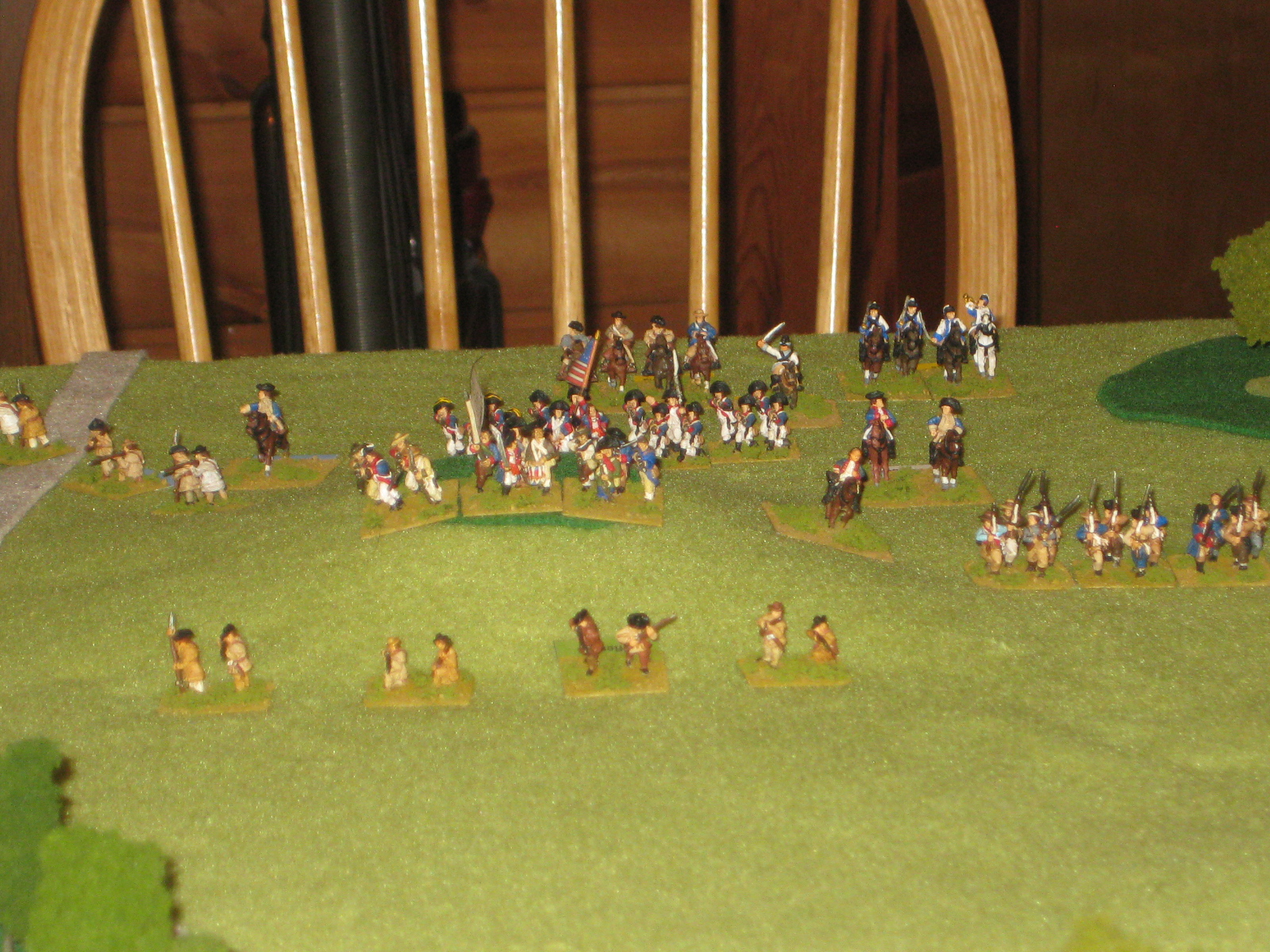 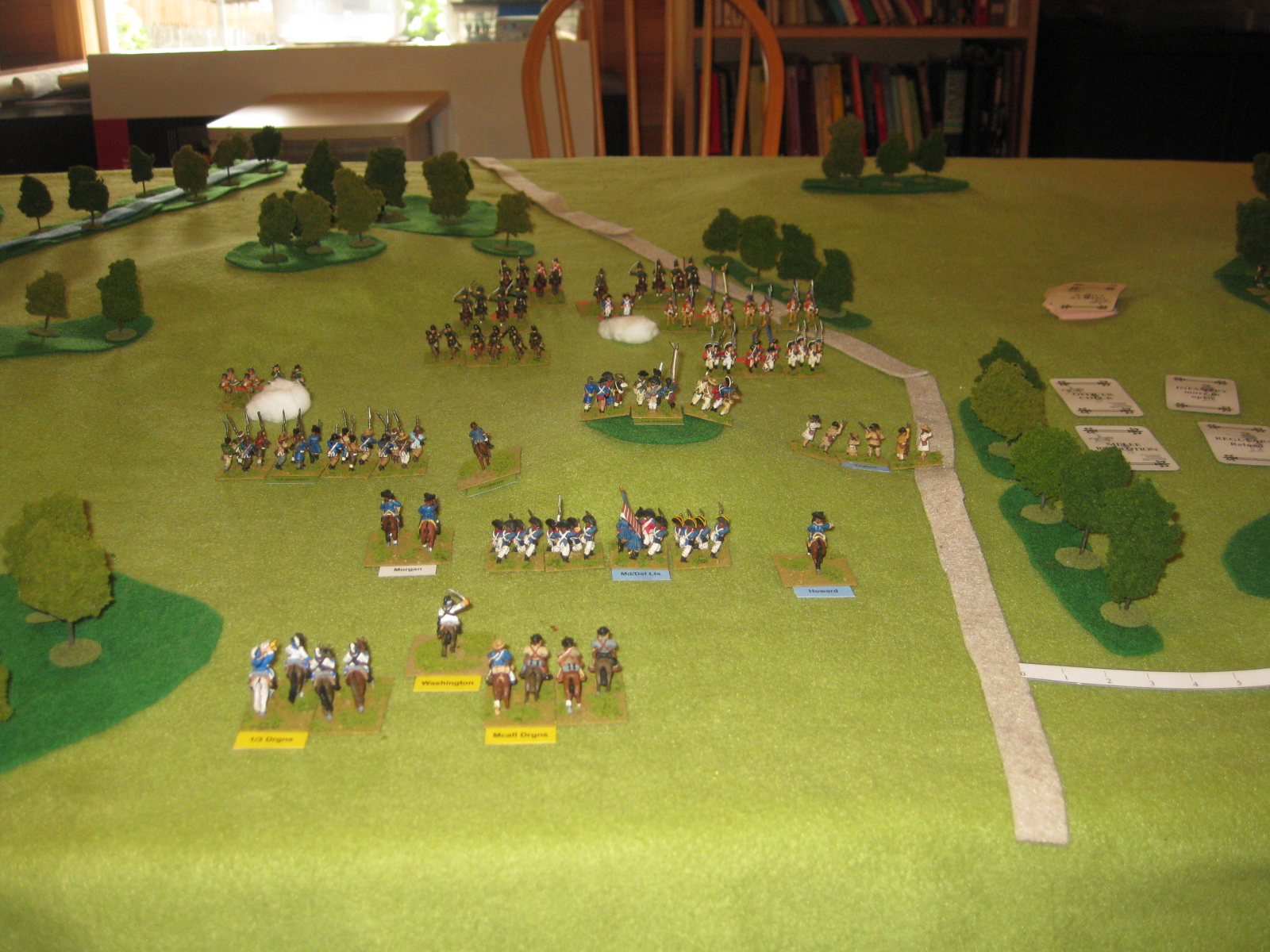 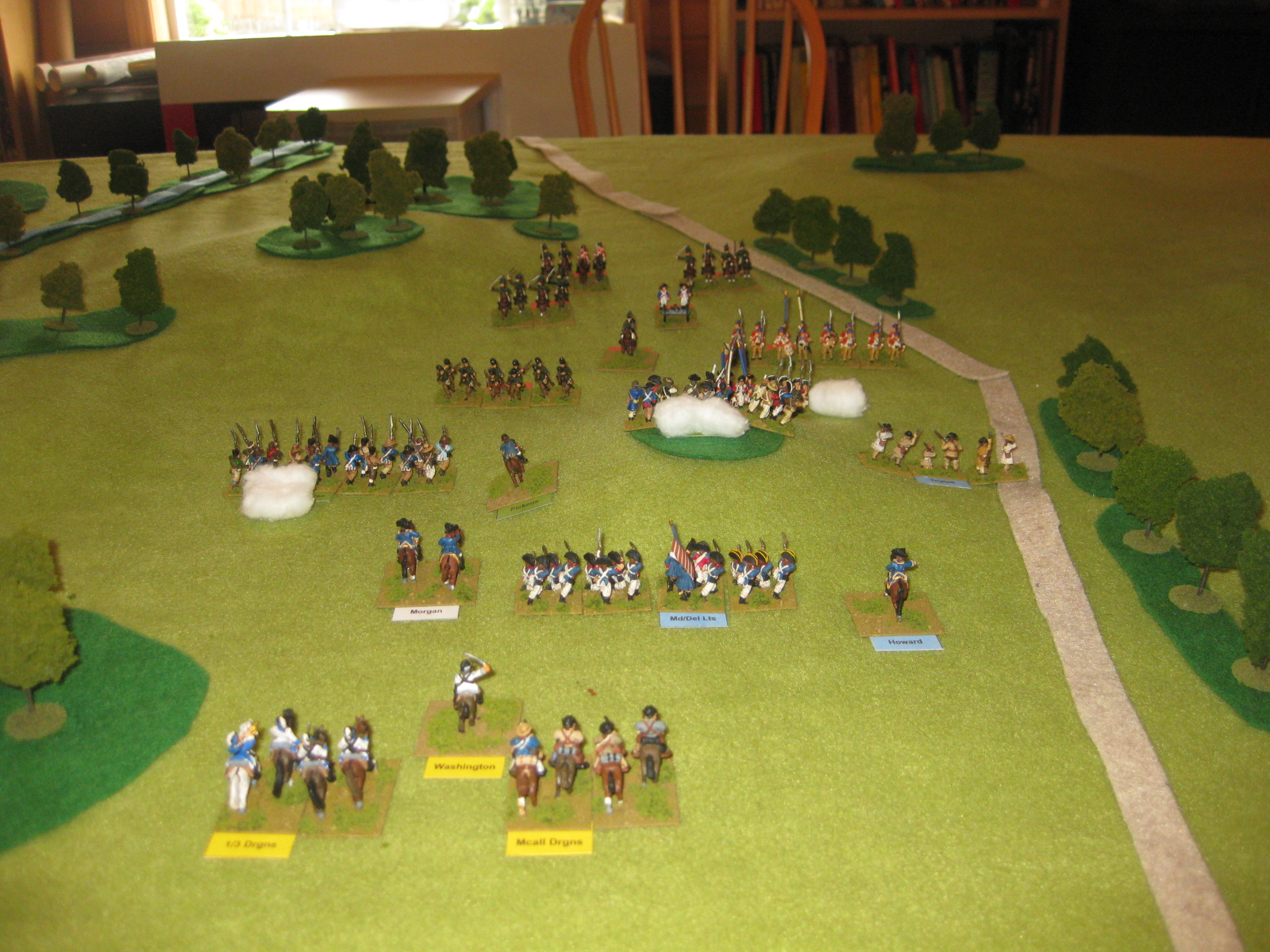 Tarleton wondering why things are going so bad: 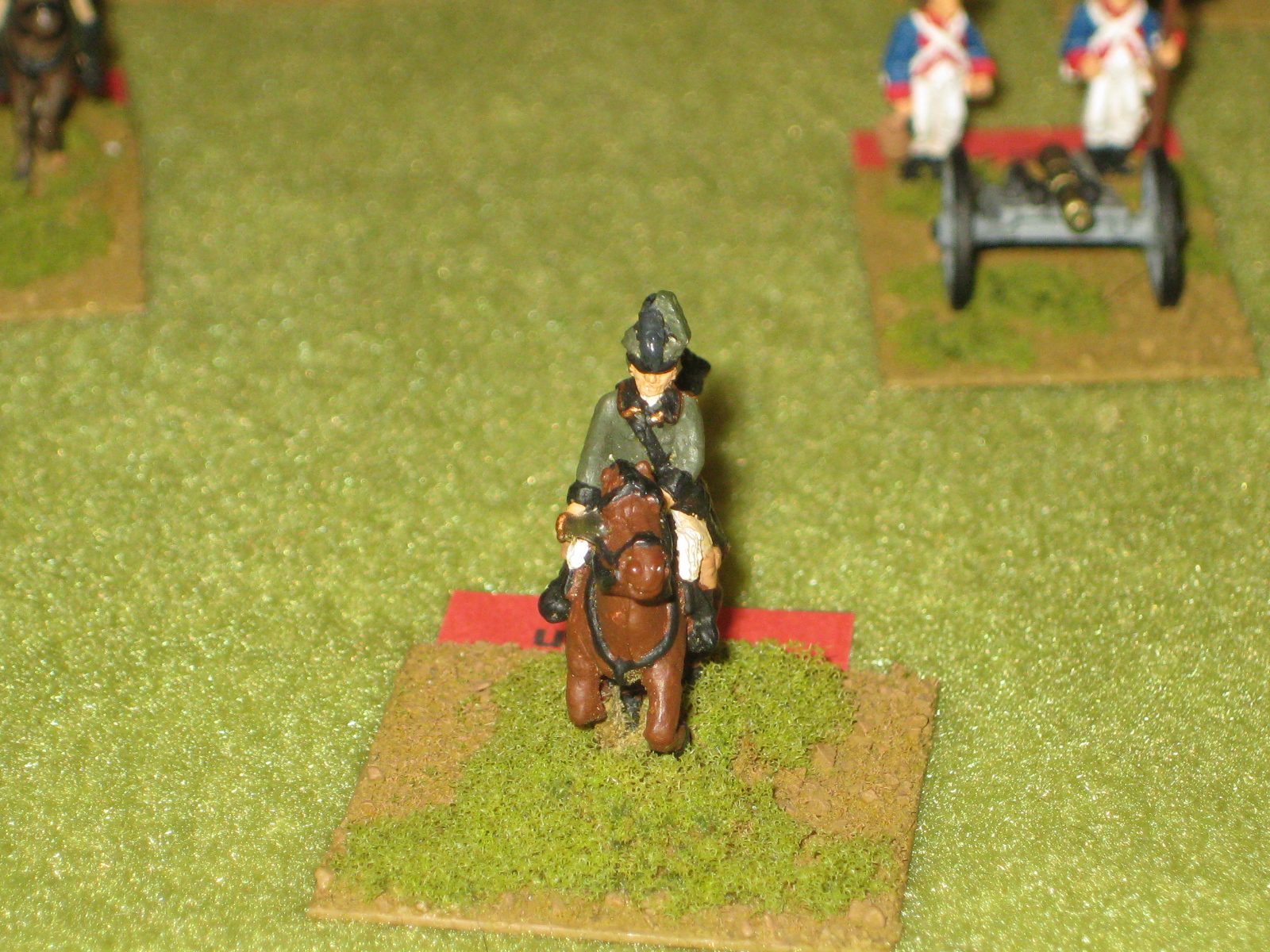 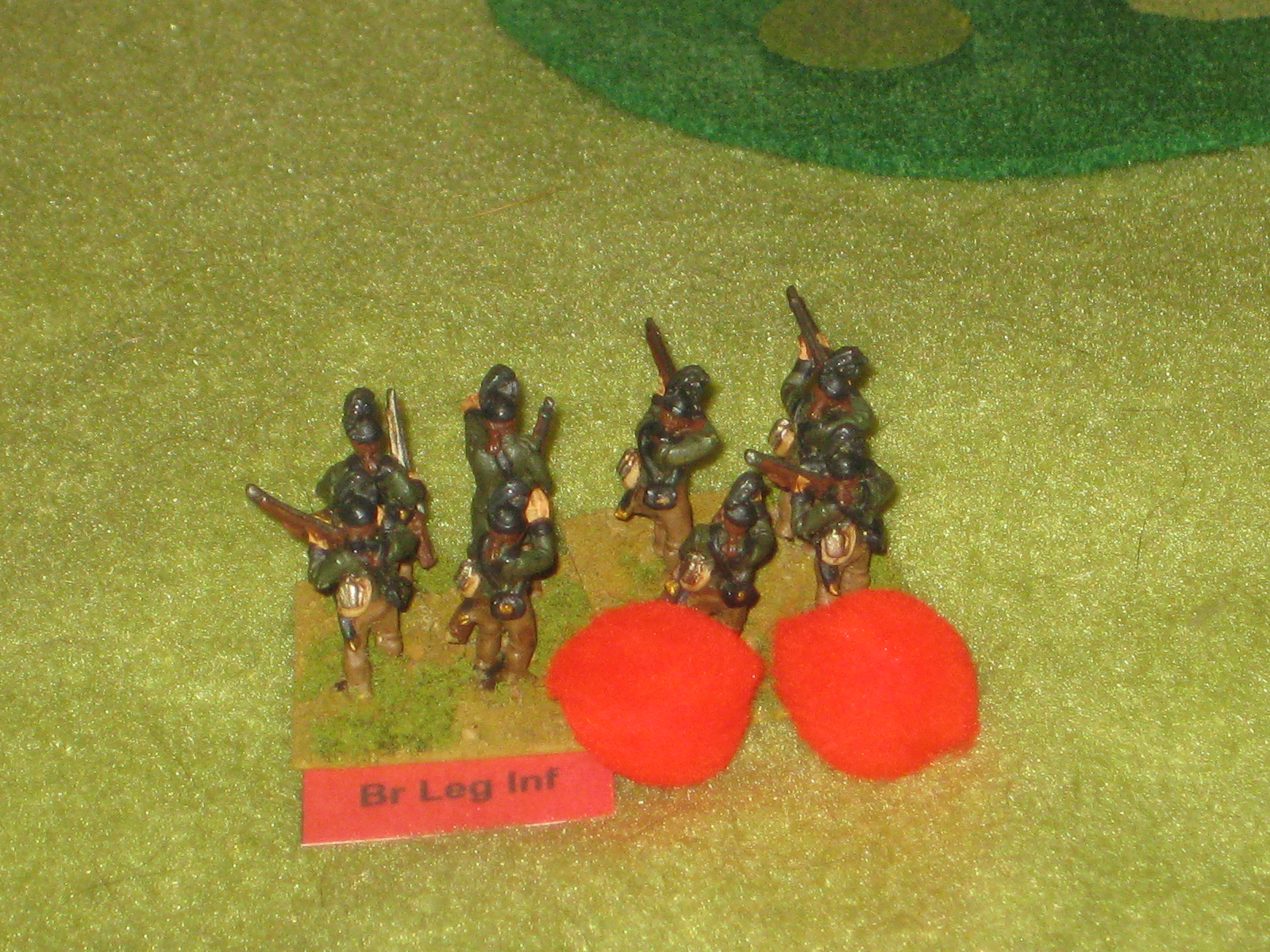 What’s left of the Americans (where did all the militia riflemen go?): 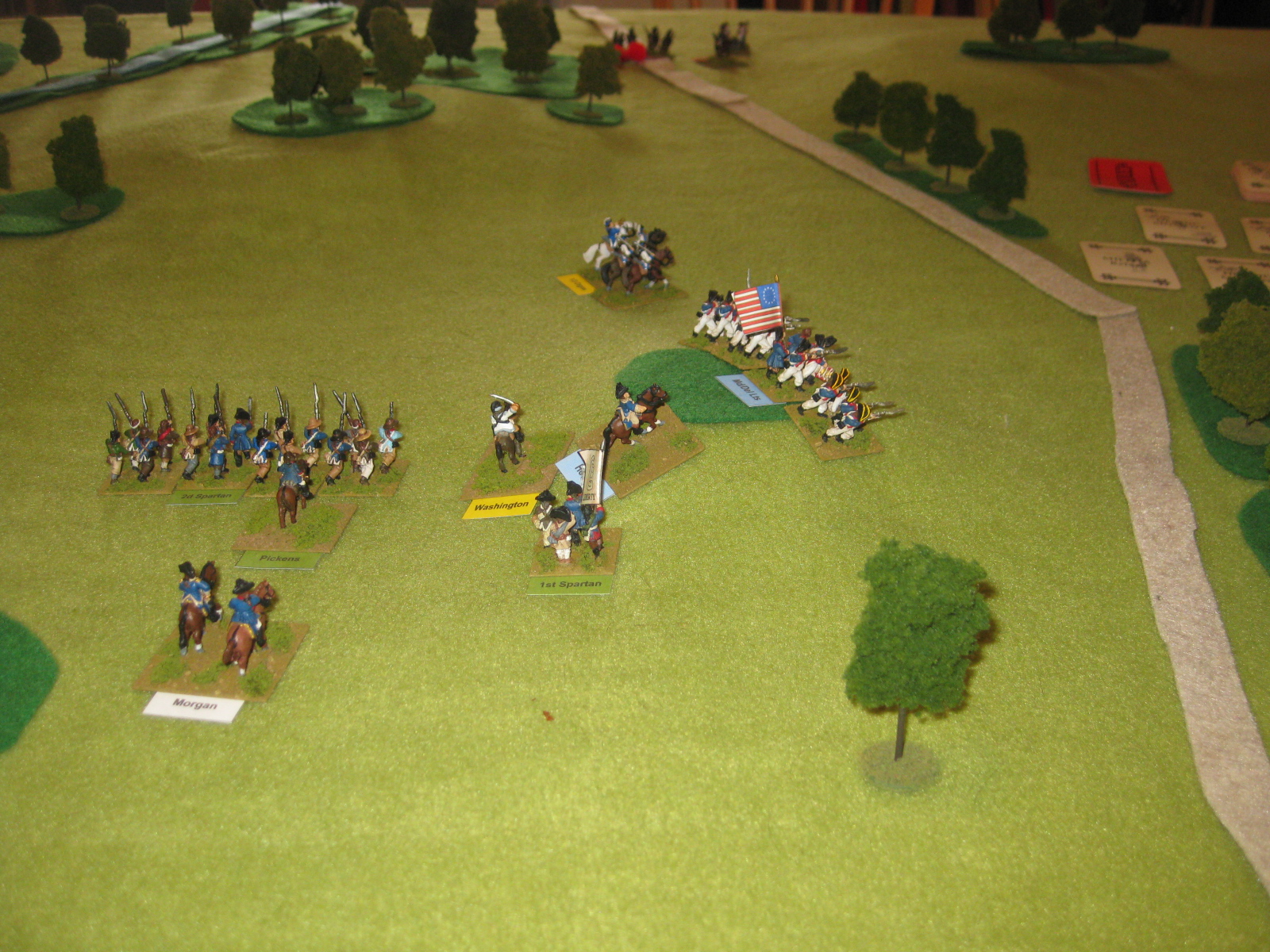 The American set-up (cavalry to the front): 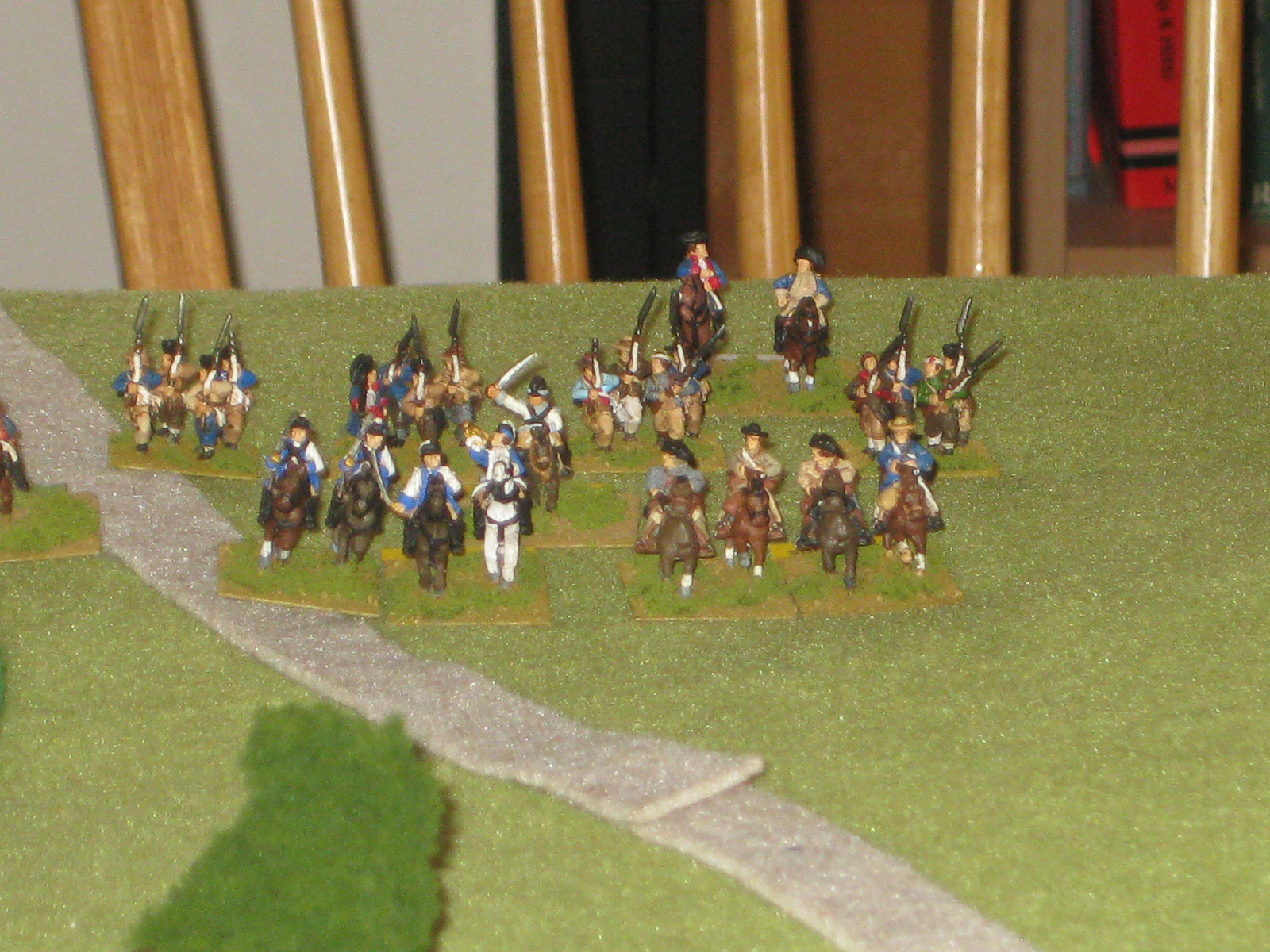 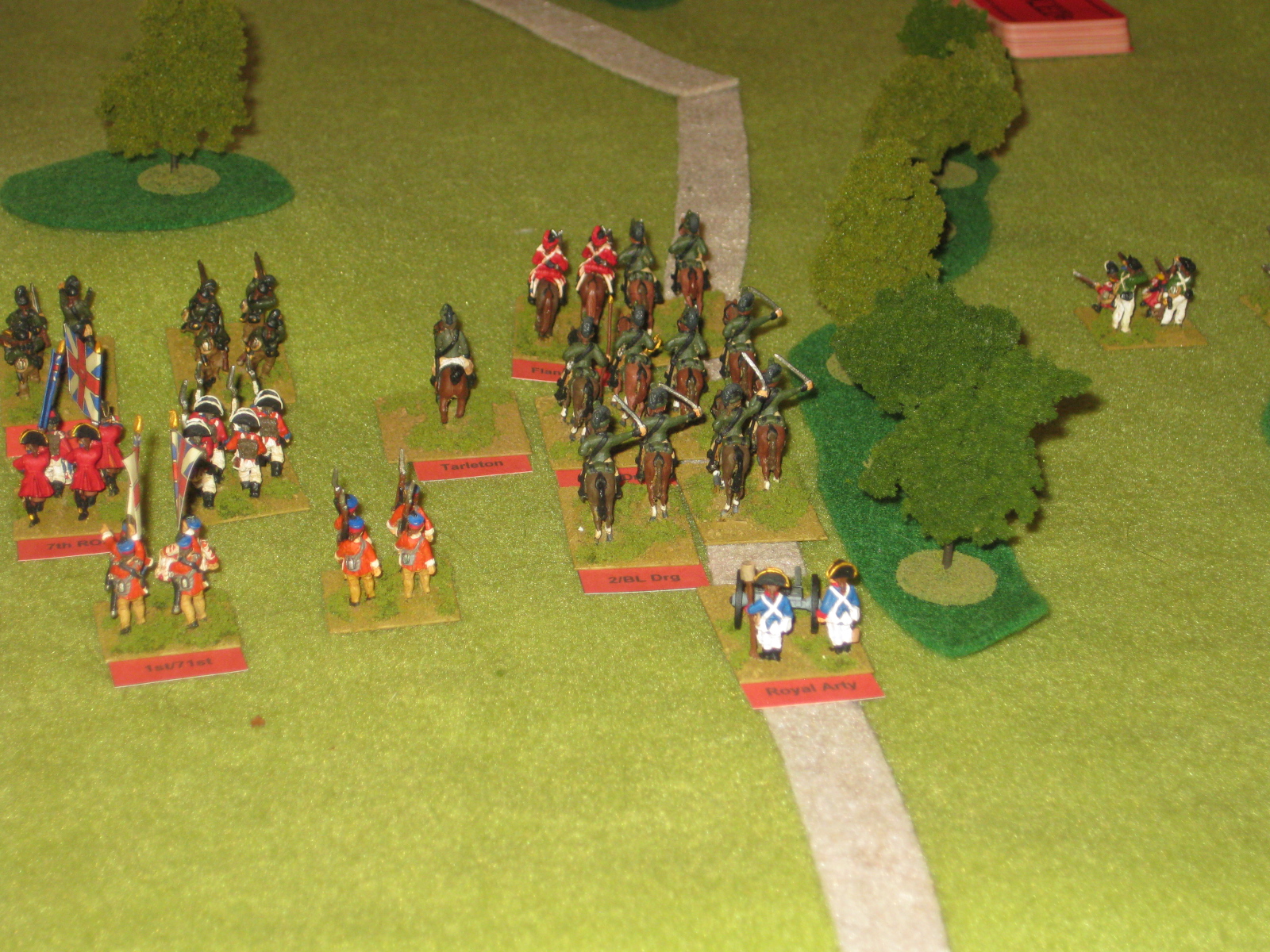 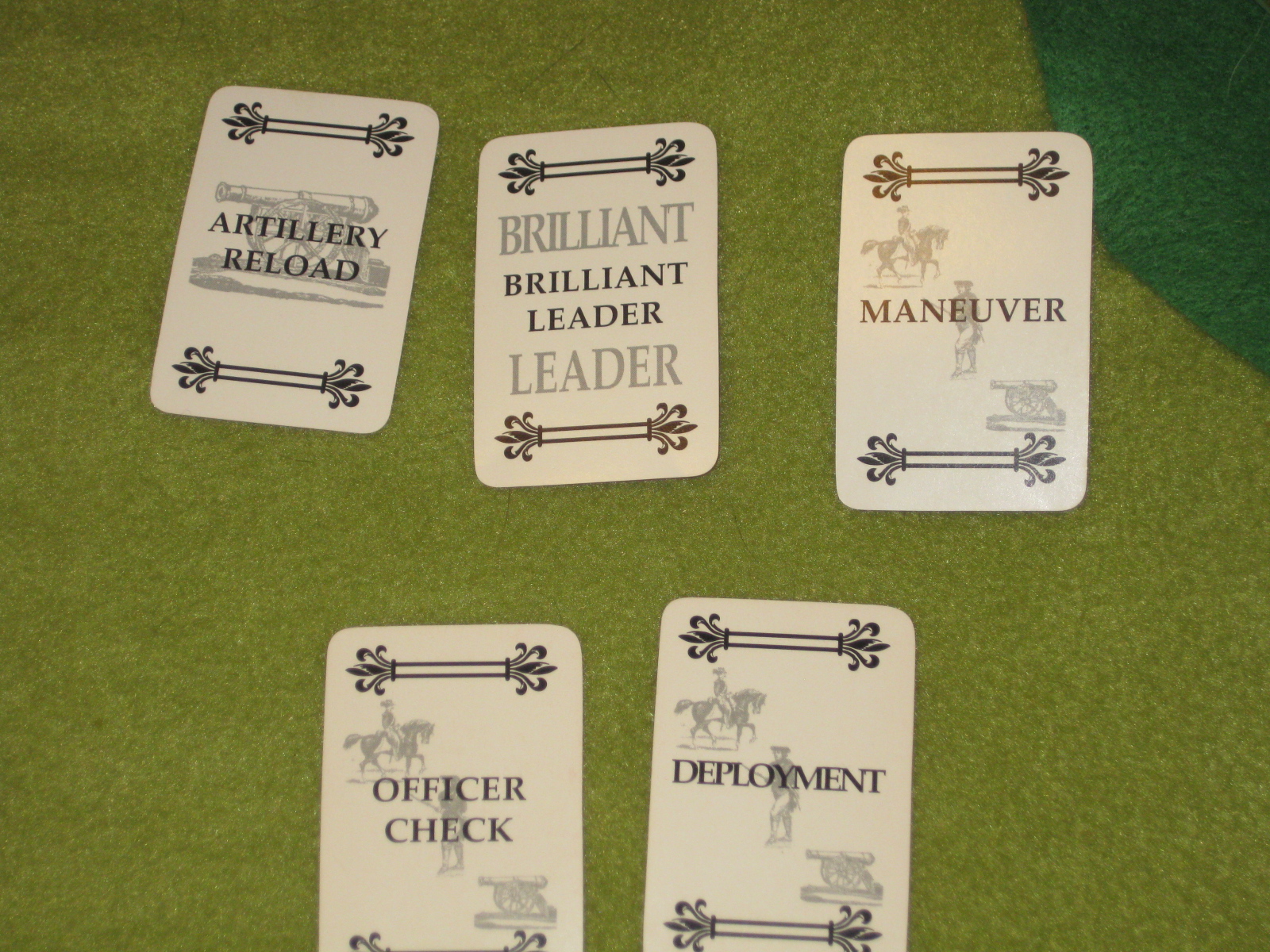 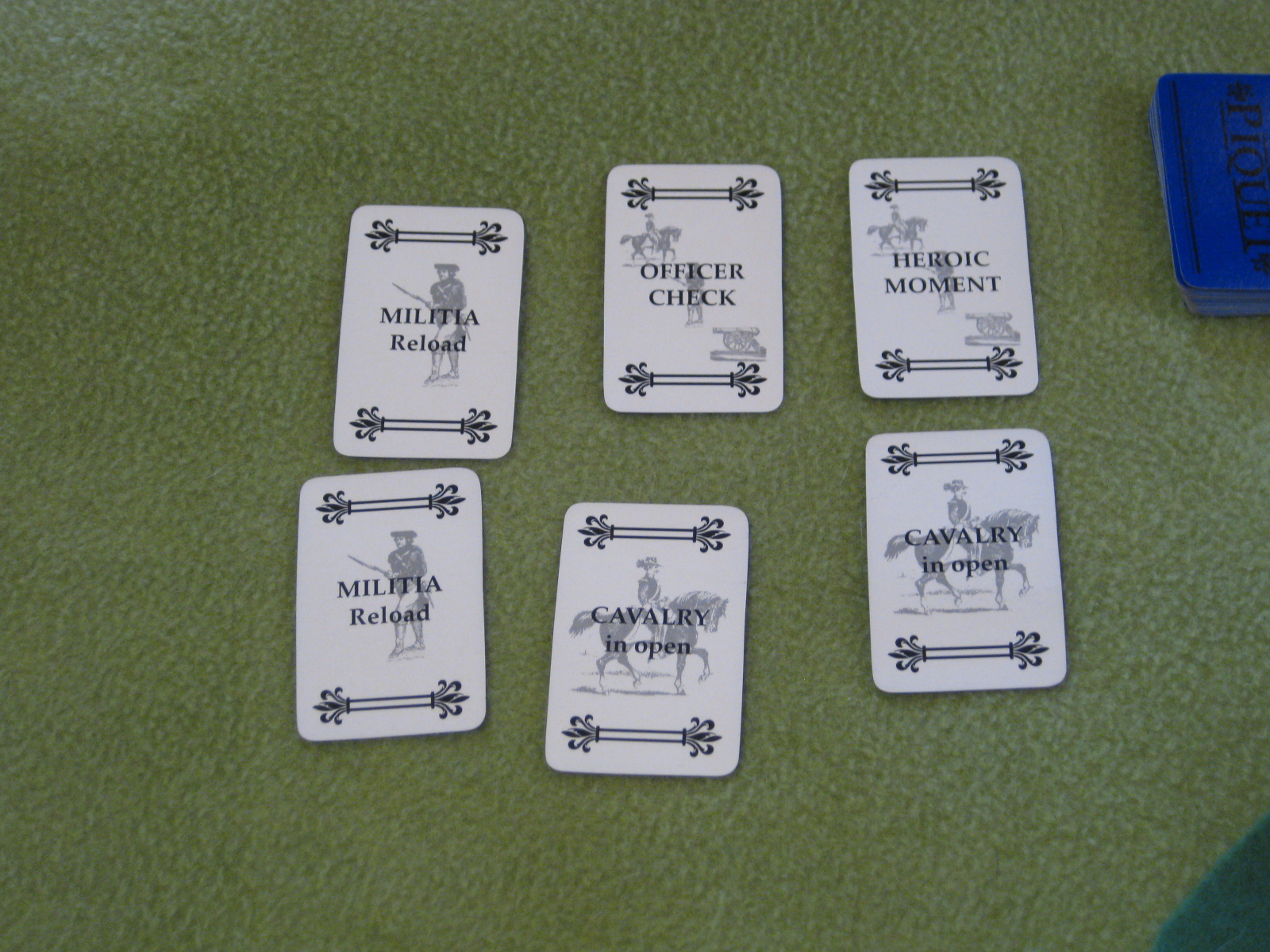 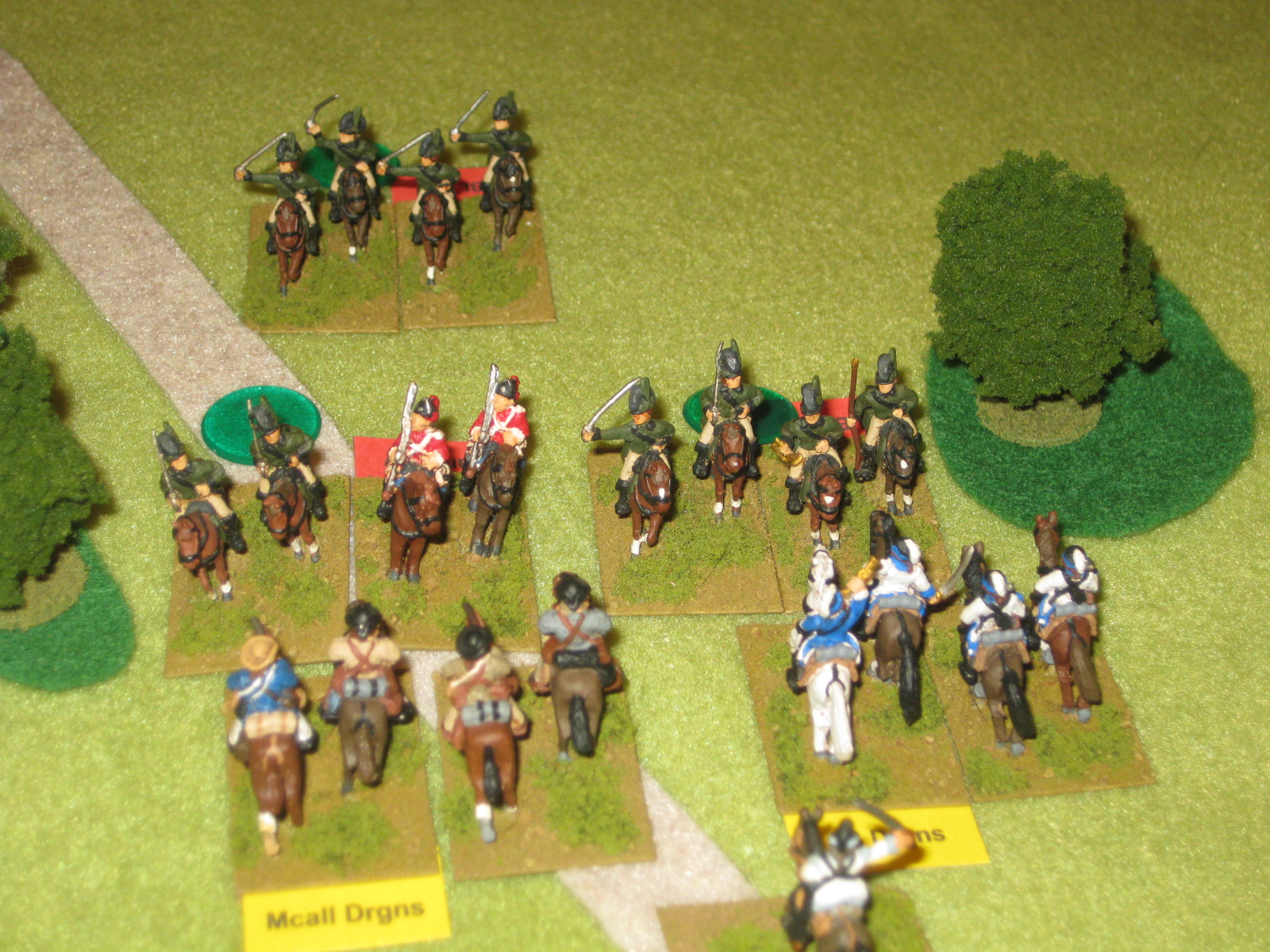 It looks like the cavalry battle was not productive for either side (what happened to my cavalry!): 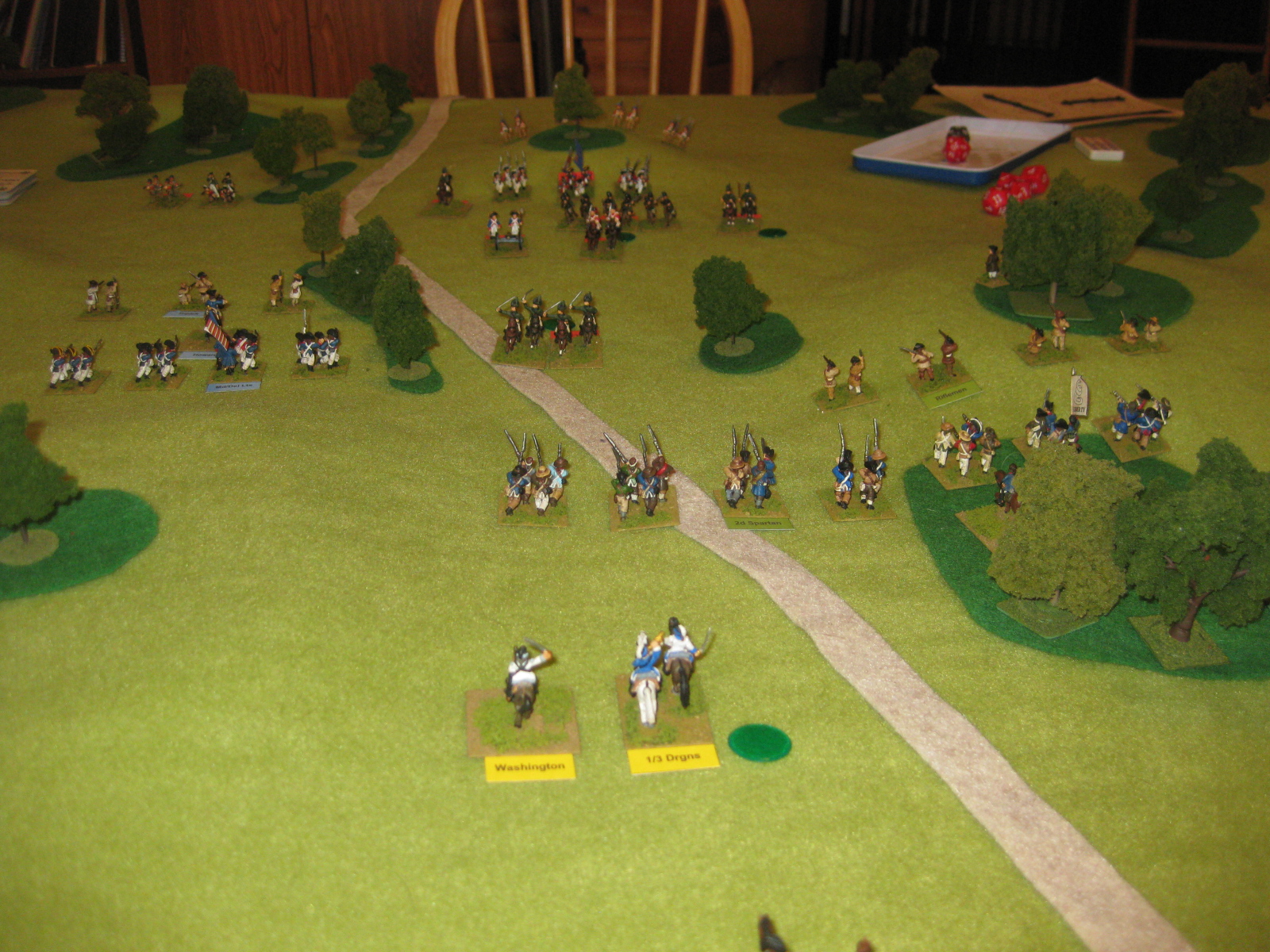 Fritz and Ernst shelter behind the American riflemen: 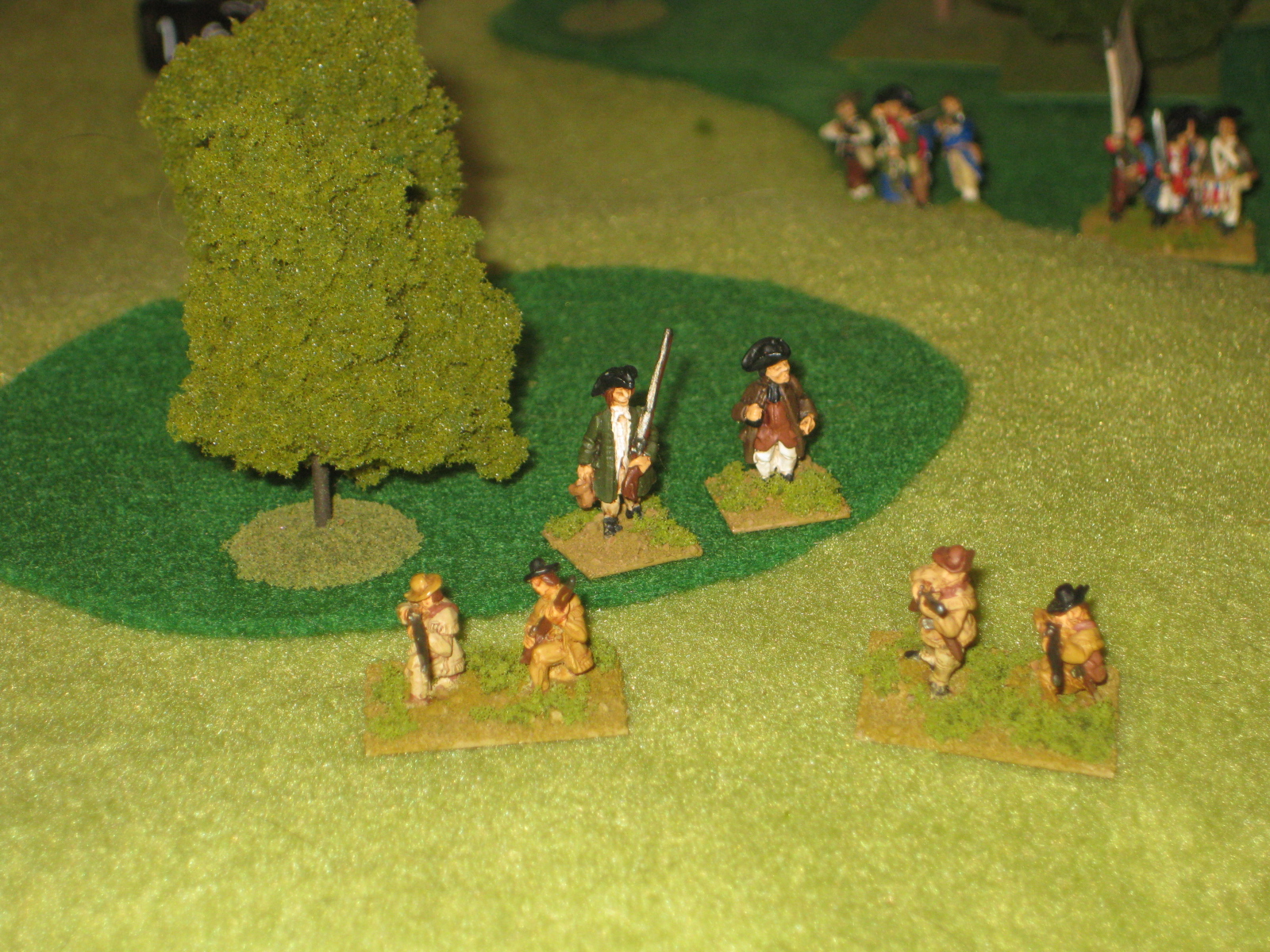 Another decisive action with the 71st Highlanders against the Maryland/Delaware Light Battalion: 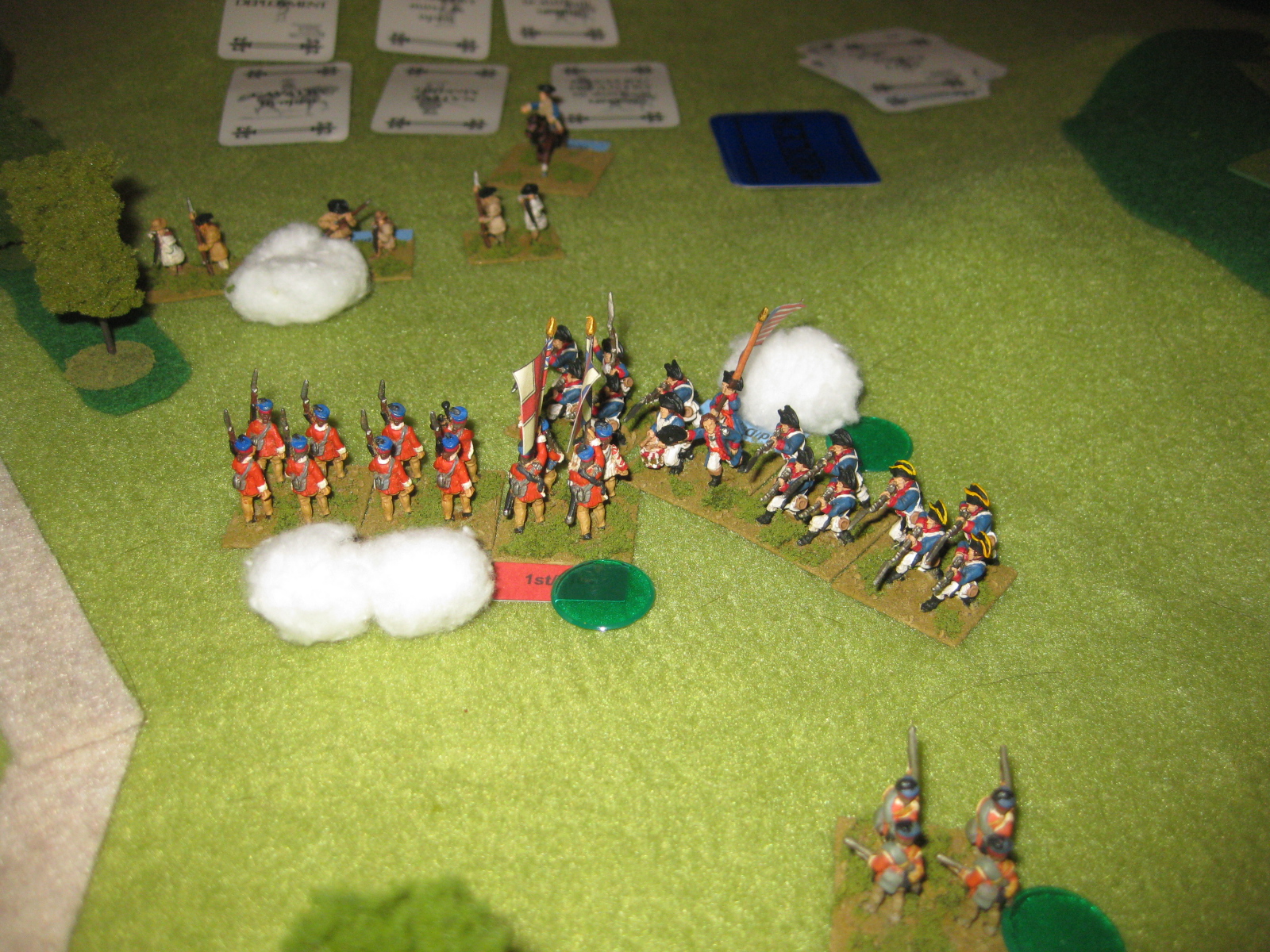 The 71st Highlanders and a squadron of the British Legion Cavalry routing: 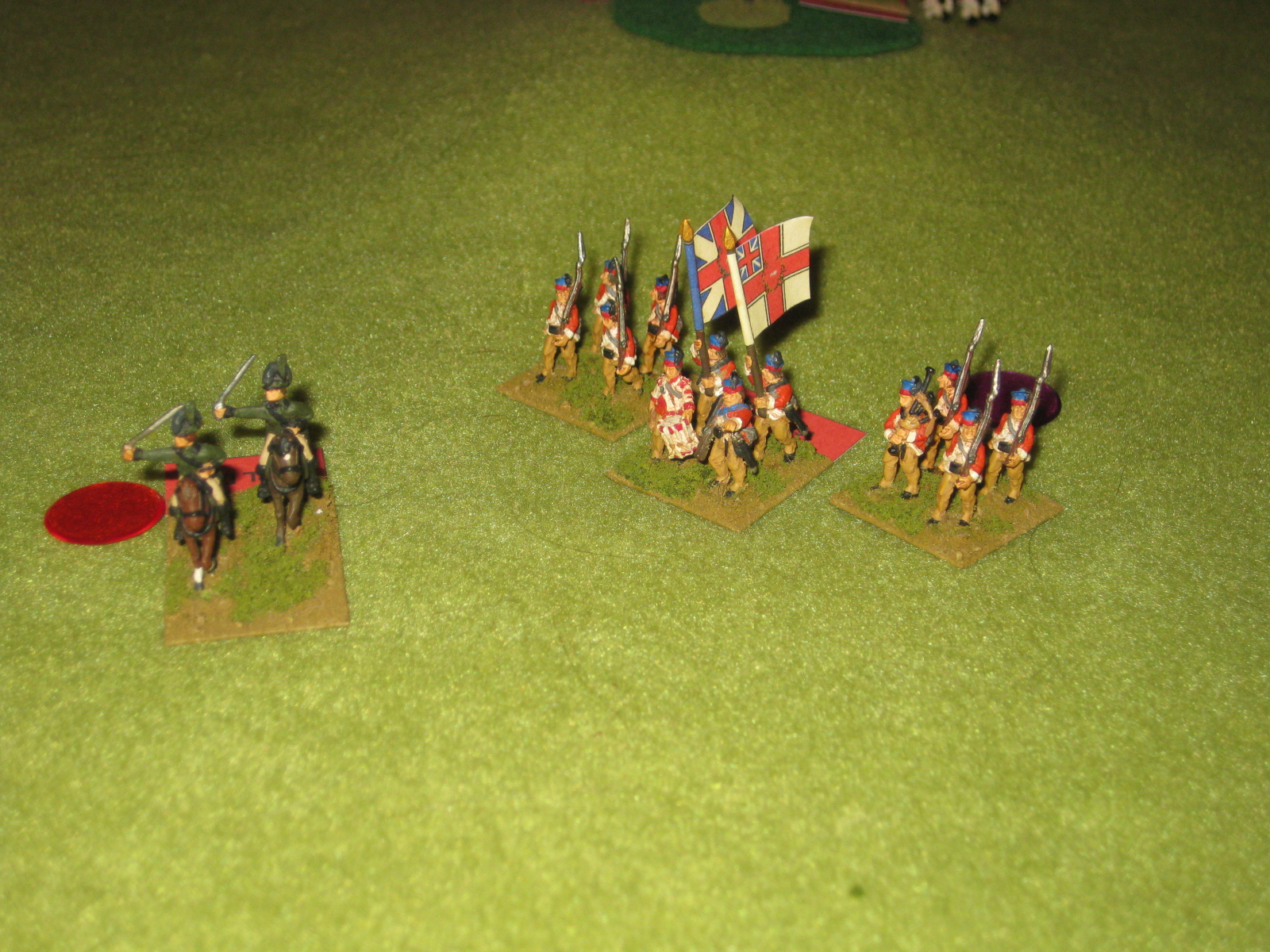 Tuffy the Cat (yes, her name is really Tuffy) tells me that wargame time is over and it is time to feed the pets: 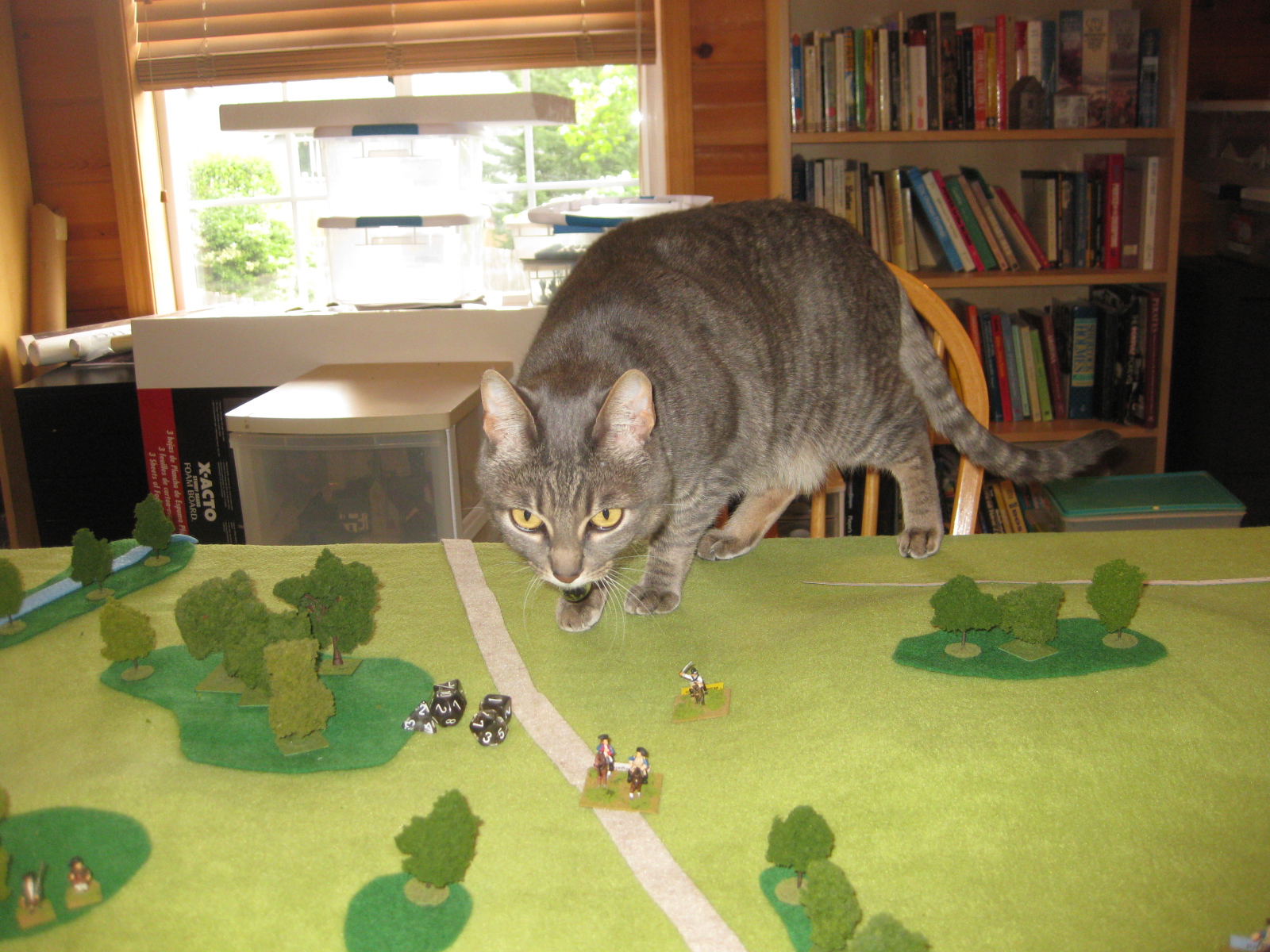 Both games went very well and played fairly quickly. I think not paying an impetus point to play or discard a card is the way to go. I also liked the card hand system much better as you could make plans ahead, which sometimes didn’t work if the circumstances changed.