This is a bit late, but life has been very busy with lots of not so fun work related issues. Despite that, Mark and I were able to get together in February to play a game. We tried out my Johnny Reb 3 variant for the American Revolution. I’ve tried it out solo several times, but this is the first time I tried it with a live opponent. Mark had played a lot of Johnny Reb over the years and quickly (like in 1 turn) picked up the game. We did a historical scenario, Camden from 1780. It is an interesting scenario as the battlefield is mostly woods.

Here is the scenario: Camden Jan 2019

The map is included in the scenario but here it is for reference (each box was 8″ on the table): 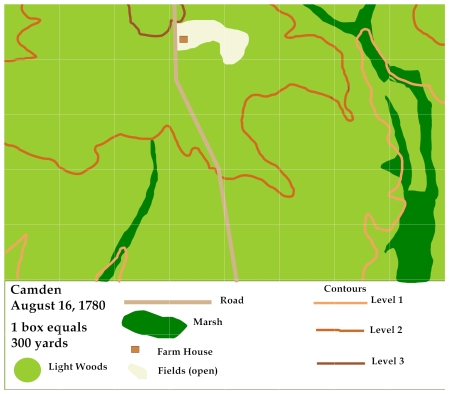 We got started late as there was an accident on the highway and Mark had to take a major detour to get to my house. Overall the game went well. It was a large scenario for the rules, but everything played well. We didn’t get to the end, but I think Mark was winning when we called it. I liked the game, but I honestly didn’t have as much fun as when Mark and I played Volley & Bayonet in our last game. That has got me thinking about trying out Volley & Bayonet out again for the American Revolution.

Here are some photos of the game (taken by Mark):

The plowman seemed undetterred by the pending battle 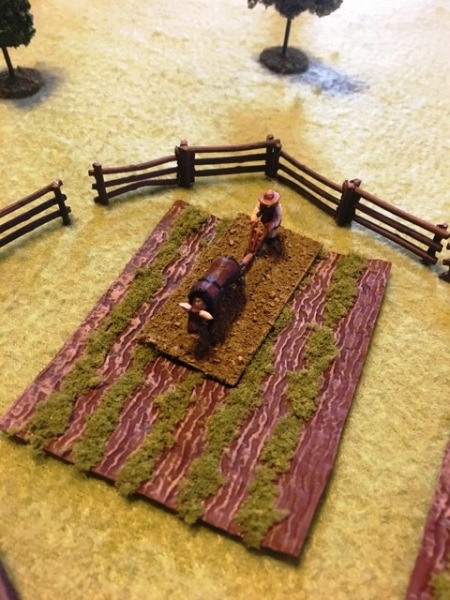 However, the local sheep herder worked to bring in his flock 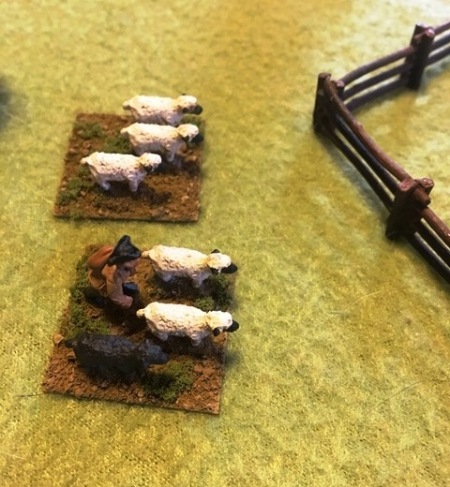 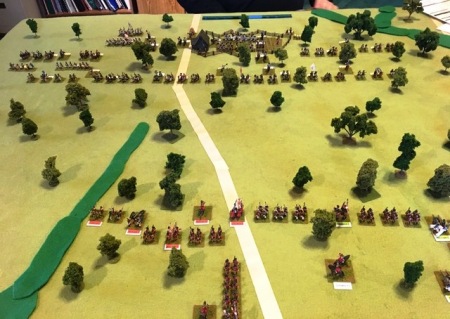 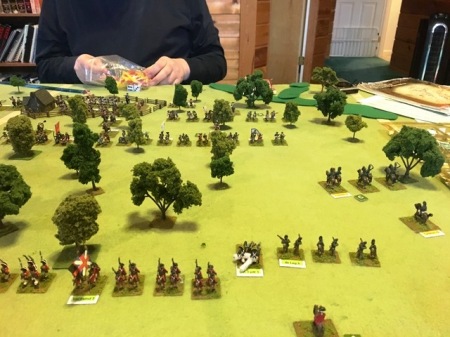 On the British left, the Americans counter-attacked 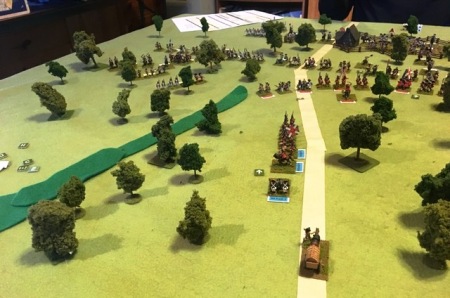 In the center, the American militia started to take casualties 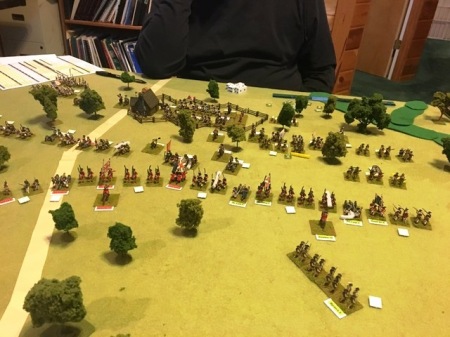 The American advance on the British left slows down their attack 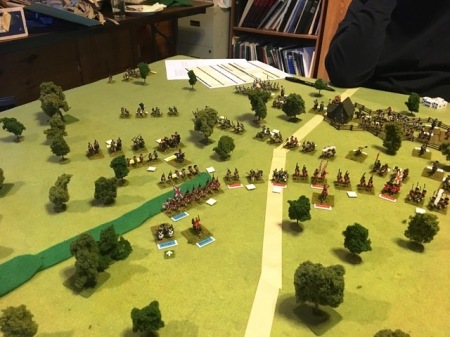 The British left continues to advance 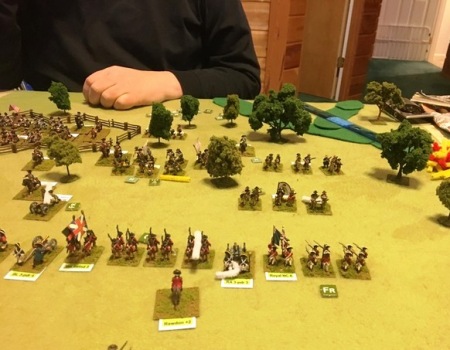 Dog and cat wonder what the hell the humans are doing (actually the cat wants to sit on the game table!) 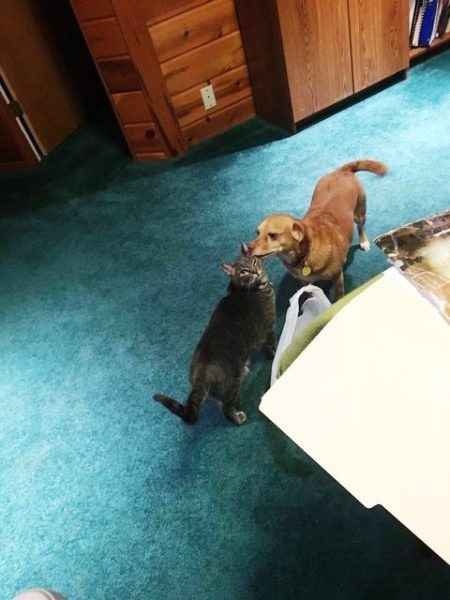 The Volunteers of Ireland (British provincials) charge the American militia 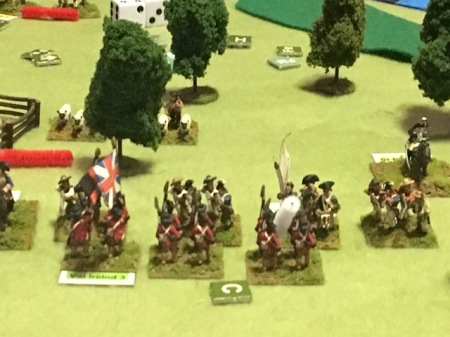 Most of the militia in the American center rout away 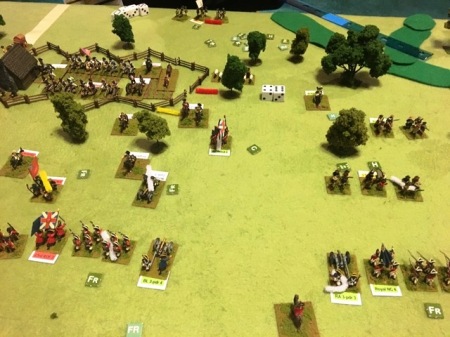 Here I curse my militia for routing 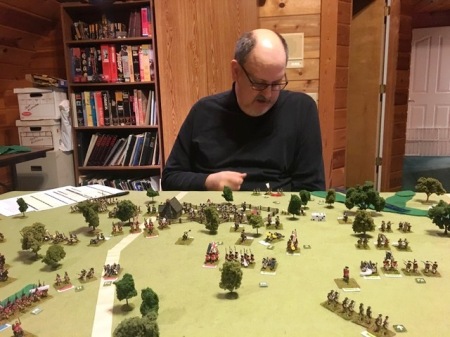 The British reach the American Continentals in the farm 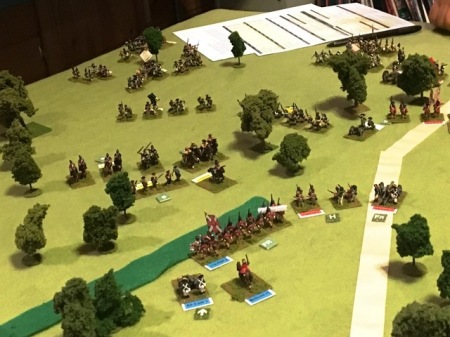 An American militia brigade commander wonders where his brigade went 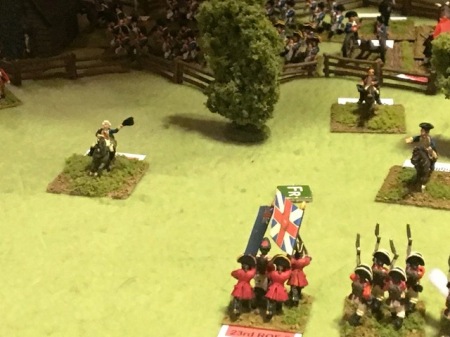 This is where we called the game due to time. I still think the British still had an advantage, but we were not able to complete the game.

It did take longer than I expected to play the game, mostly due to the number of units and complexity of the Johnny Reb 3 rule (which are far more playable than the 2nd edition). I think the rule variant does a good job of portraying the American Revolution, but we might need smaller battles. It was nice to be able to move units when I wanted rather than waiting for the right card like in the various editions of Piquet. The Johnny Reb 3 variant was pretty much stretched for a battle this size with only two players, but it would probably be a great set of rules for smaller scenarios like Cowpens with just two players.

This entry was posted on Friday, April 12th, 2019 at 6:43 pm and is filed under American Revolution, Games Played, Johnny Reb, Scenarios. You can follow any responses to this entry through the RSS 2.0 feed. You can leave a response, or trackback from your own site.